Another cold day in Sikkim. And a perfect day for a walk in the woods to a nearby waterfalls, Mainebass waterfalls.
Like Pema and Jamuna had promised, they joined us too. They were more excited than Naveen and I to go on this trek, they were so excited to show us what was ahead, what their homeland had to offer and they eagerly wanted to show off how beautiful their it all was.
It was a short trek, about 4 kms to the waterfall. It wasn’t a difficult walk, though it was uphill. We walked along canals of water gushing past us, the soil and the rocks underneath our feet were wet and slippery and we were surrounded by lush greens. 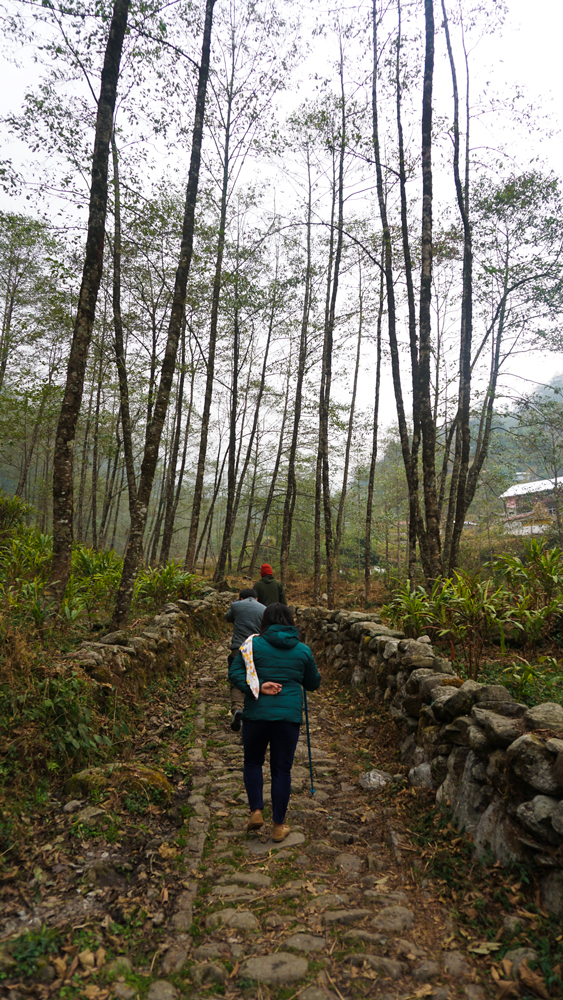 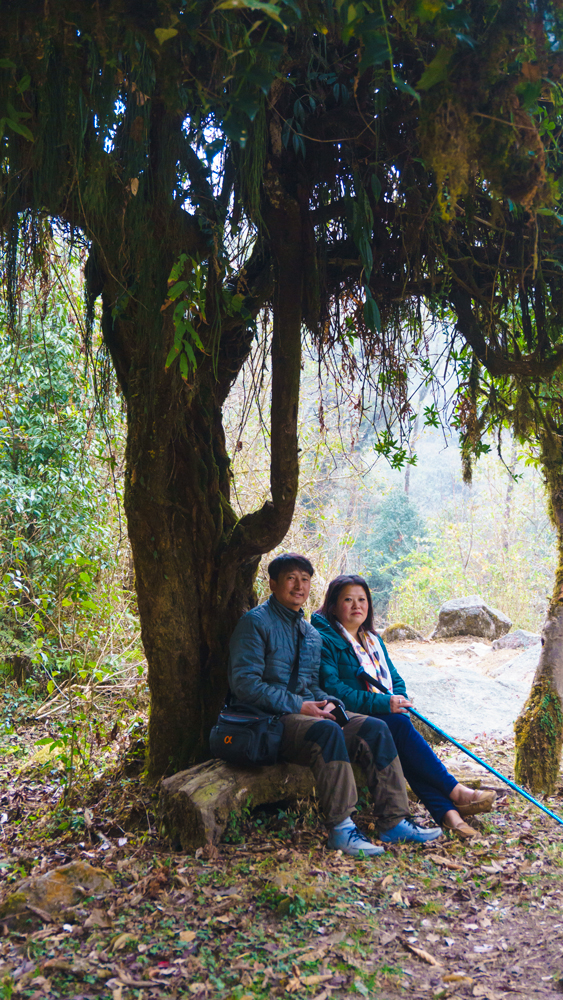 On the way to the waterfall, there is a camping spot. A large flat, grassland amidst all the greens, where you can set up a bonfire and tents and enjoy the view of the looming mountains all around you.
Just before we reached the waterfall, we had to cross the most enchanting place. A path with a canopy of trees, just the green of the trees and the brown of the soil everywhere you look. Like, Alice’s wonderland but even better.

Naveen and I took our time, enjoying the route, taking time for the sights to sink into our hearts while Pema and Jamuna hurried along the path, light on their feet. It was probably habitual for them to be among these gentle giants, the trees and the mountains.
But still, there was a moment, when the both of them stopped, sighed and looked around with awe and took it all in. That told us that no matter how many ever times you cross the same path with the mountains and the forests, they always teach you something. Something.
When we reached the tall, gushing waterfall, the sky was covering up with dark clouds and there were chances of rain. But since we were so high up, it was hail – freezing rain. We spent maybe about half an hour by the waterfall, I took the opportunity to fill up my water bottle with the clear water and sip on it. Cool, refreshing, light, fresh waters from the mountains. I know they say water is tasteless, but it was delicious. There is no better beverage than water, after all it is the creator of life. 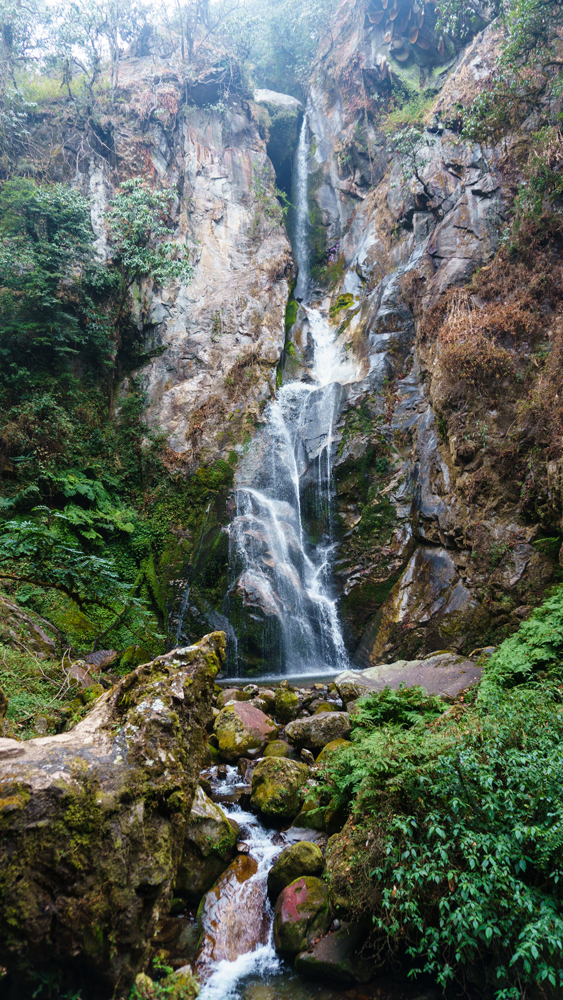 Soon, it started to hail heavily, so we decided to head back, the path was going to be even more slippery and chances of falling were high. (I didn’t the rains to make me slip, I had already slipped and landed on my bum as I made my way to fill my water bottle.)
On our way back, Jamuna stopped and pointed to some plants just growing along the path. “Yeh BP or sugar ke liye bahut acche hai. Mei banau?” (“They are good for BP and sugar. I’ll cook them?”) And without waiting for an answer, Pema and her squatted and started plucking them out of the ground. That’s when I realized that most of these plants, growing at the foot of the mountains are high in the medicinal value and no wonder the people of the mountain are so healthy fit. Everything they get, from the water to the fertile soil to the herbs and plants are all right there for them. Just being provided by the mighty mountains.

I was a lot better at this trek. Totally, we had covered about 8kms and my spirits were still high. My stamina had improved in the matter of a couple of days. And though, I took my time walking, I wasn’t out of breath, my body wasn’t sore and I was feeling good. Naveen, of course, was even better. Pema and Jamuna looked like they had just gone for a stroll in a park.

This is what I found to be the best part of living by the mountains. There is a wonderful harmony between man and nature. The people are grateful for everything that the mountains provide them with, they know the value of the soil they work on, the water they drink. They value the warm sunshine, they value daytime and they work hard, day in and night out and they enjoy it. There is genuine happiness on their faces as they spend their time on their farms, reaping, sowing and harvesting and not an ounce of complaint.
From the bottom of my heart, I hope that they aren’t bored with it, that they aren’t bored with mountains and they don’t crave for the city life that Naveen and I are trying so hard to get away from.
There is peace here, there is happiness without reason or condition. Isn’t that what we city folk are always looking for? Then, why is it so difficult for us to leave it all behind and make a living away from it? Is it because in the cities we can be lazy while having it easy? Is it because the WiFi connection is stronger? Is that the good life? And though we have everything we want living in the city, we are so full of whine and complaint?